Today’s post will center on how the mAs you use is directly proportional to the dose you are giving your patients.  I could have just written “the dose the patient is getting” but I really want to make it clear that you the radiographer, or radiographer student, are the one setting the technique and making the exposure.  This is true whether you are actually setting a technique (both mAs and kV) or using an AEC and just setting the kV.

To prove this point to you, I am going to present an experiment I conducted a while back with my DUKE phantom (see image 1). 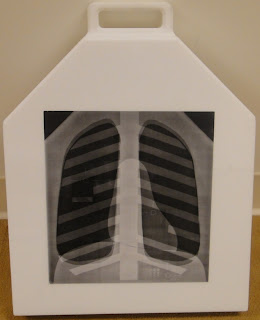 I did the experiment to prove that both the EI number and the dose will directly change with the mAs, so you will see Agfa’s LgM numbers also annotated on the images.  For this article I will only be concerned with the Entrance Dose (ESE) that was annotated on the magnified images that go with each exposure. I hope this proves to you that changes to the mAs are equal to the dose.  Because of this I have been telling radiographers and students that a great way to keep yourself from needlessly increasing the mAs is to call it dose.  By this I mean you would say “I am going to use 50 or 100% more dose” instead of saying more mAs.  The word dose has a lot more impact and energy to it while the word mAs is no big deal.